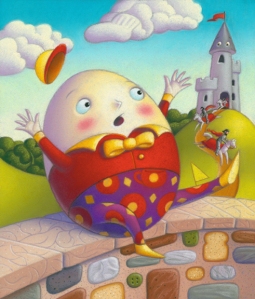 Faith is a fragile thing: one minute it is as solid as a rock … the next it has evaporated into the ether … but once shattered it is difficult to reconstruct (rather like Humpty Dumpty) and I can vouch for this from personal experience.

About 10 years ago I was studying Applied Theology at our local university. I was there as an independent, self-funding student but many in my class were also members of the Northern Ordination Course who had extra help and support from outside the university. I went along to the initial sessions with firm ideas of what I believed and what God was all about – it was all standard stuff that I had been taught and adsorbed from others rather than thought about for myself – but during those first months everything that I had seemed to crumble into dust. We were taught to question; we were encouraged to look at biblical passages in context and from all angles and we were expected to think … sometimes this even extended outside the box (i.e. beyond the boundaries of formal Anglican doctrine.)

In the main this wasn’t such a problem for the guys (and gals) from NOC: okay they may have had a bit more of a problem with releasing themselves from the standard doctrine and formularies, 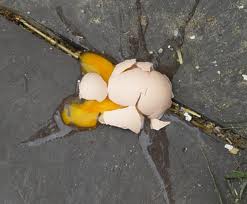 but when their faith was dented they were taken away and bionically rebuilt by their NOC tutors and supported by the other members their peer group … needless-to-say I had none  of that. When I found my own faith crumbling it was, in the main, up to me to pick up the pieces and put them back together again … and what developed was a very different animal from that with which I had started. Think about it, whilst the shell of faith may be reconstructed rather like a three-dimensional jig saw puzzle, the contents can never quite be the same.

But it’s not just new ways of thinking that can dent faith. There is an age old model that suggests that there are three pillars which support faith: Scripture, Tradition and Personal Experience – imagine them to be like a three legged stool, which we know has inherent stability, with our faith, represented by an egg placed on the top. If the whole thing remains in balance, the egg remains secure, but if the support becomes unstable or the length of one of the legs is longer than the others, the egg may well roll off and shatter on the ground. This sad fact not only affects an individual’s faith but it can also cause conflict between the various denominations of the church.

Think about it: the Catholic Church majors on tradition, the Evangelical Churches hold fast to scripture and Liberals tend to place their personal experience on a higher plane than anything else … and then we are surprised when we have difficulty bringing the different factions of the Anglican Church together to agree on various matters such as the ministry of women.

I used to describe myself as a Liberal – in practise this probably meant that I was trying to force God into the pigeon holes that I had designed. I now prefer to describe myself as an Holistic Christian – Experience is still important but Scripture and Tradition cannot be ignored … Scripture interpreted in context and Tradition, which provides a sense of awe and wonder, in the church but also as is relevant to the communities in which we serve. Thus, the answers to questions of faith are not necessarily absolutes: they may well vary depending upon the context and community in which the questions are asked.

Holistic Christianity is not intended to be wishy washy and good for nothing but it is a way to keep the 3 pillars of faith in balance … otherwise none of it makes sense!